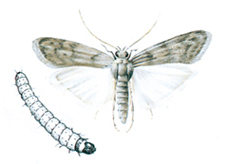 When someone finds a new animal, which is not yet known to science, and describes its appearance, it is the describer’s privilege to give it a species name – in Latin. Along with a family name, also in Latin, placed in front, this gives it a unique identification. However, in texts in other languages than Latin the common names of insects are used, for example the common English names. The Sitophilus granarius is called granary weevil when referred to in English texts because it allows one to use the name in a meaningful way in the English grammar (singular, plural, indefinite, genitive, etc.). Common names occur because there often will be a need to write about insects in local languages.

Both the Latin and the national names of the pests contain information about the animals. Some names can be very informative when it comes to animal appearance. The information you may get on biology and incidence via the name may, however, be confusing because the names often reflect what we thought was known about the animal, when it got its name. German and American cockroaches are not specifically related to these countries, while the Australian spider beetle actually is an immigrant from Australia, which is more known among us now than the “ordinary spider beetle”, that is the white-marked spider beetle. There is a certain preference for choosing common names that allude to the way insects seem to people, even if the insect actually mainly occurs in nature. Flour mites, sugar mites and firebrats are examples of insects that live elsewhere but which are named after the places in our environment where they are undesirable. Therefore one cannot always rely on the interpretation of the insect names. The common names are convenient to use, although they are sometimes misleading.

Knowing the name of an insect, makes it easier to learn the experiences others have had with this particular kind of insect. Therefore it is essential to determine which exact insect you are dealing with, when it is found in a product or in a company.

Depending on how experienced you are, you can make more or less qualified guesses as of the insect name. When it comes to food, the most common species are so frequent that a beginner should just concentrate on the species mentioned in this book. When insects appear that do not correspond to the insects shown and described here, you can seek help from more experienced colleagues or from professionals in relevant museums. You can even determine the insects by literature or try to find them on the Internet.

In reference books, the emphasis is usually put on showing insects as oversize drawings. These museum-like presentations are very accurate and cannot be dispensed in a book like this. Usually there may not be need for a perfect key, from where the size and shape of an insect can indicate a likely match.
The images (Fig. 4.1 to 4.37) are made on the basis of photocopies of insects. For technical reasons, they are shown as pitch black, but they show the insects in their natural sizes and are similar to what you see. Use them by placing the insects found on the image that looks the most alike. In the chart on pages 47-54, you can see the insect names, some comments about them as well as references to where in chapter 5 they are mentioned or showed by drawings.

Animals and insects like wasps, earwigs and birds are not included in the key. Nor are the mites shown. They are so small that they cannot be displayed, but the size is equivalent to a full stop in this book and insects this small will probably always be mites.