You are here: Home / Pests in House and Home 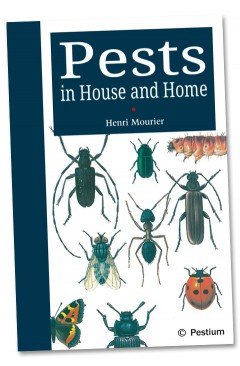 In writing this book the aim has been to produce a practical handbook which gives a comprehensive account of the animals which can be met indoors in Europe, with particular attention to the tracks and signs they leave and the damage they sometimes do. The use of this book does not require any previous knowledge of zoology, and the identifications are based entirely on characteristics which can be seen with the naked eye or with an ordinary good lens.

The book has been written not only for the private house owner, but should be equally useful to all those who in their daily life have to deal with problems involving harmful animals in houses, shops, stores and factories. Far from all animals encountered indoors are harmful, so the book should also appeal to all those who have a general interest in biology.

The book was originally planned in collaboration with Preben Dahlstrom who before he died had produced the keys on pages 12-1 7 and the colour plates on pages 18 and 19.
The book’s photographer and its two authors are associated with the Danish State Pest Laboratory, and they are much indebted to Hans Wickmand, its Director from 1948 to 1975.